(This was originally posted on our Guiri Business LinkedIn Group. Join us there for full discussion)

Good Afternoon
After some intense reflection and meditation, I want to share a few thoughts on the August 17th attacks in Barcelona. Thoughts I am having as life in the “Ciudad Condal” seems to return back to normal, but a normal that will not be the same as it had been for me the last few years.
For several days after the attacks, I was working with the UK Sky News team as their local liaison. Friday morning after the attacks, we arrived before 6:00am and had to wash blood-soaked flower petals off the press area a few meters from the Miro mural – considered the symbolic halfway point of the famed Las Ramblas pedestrian street. 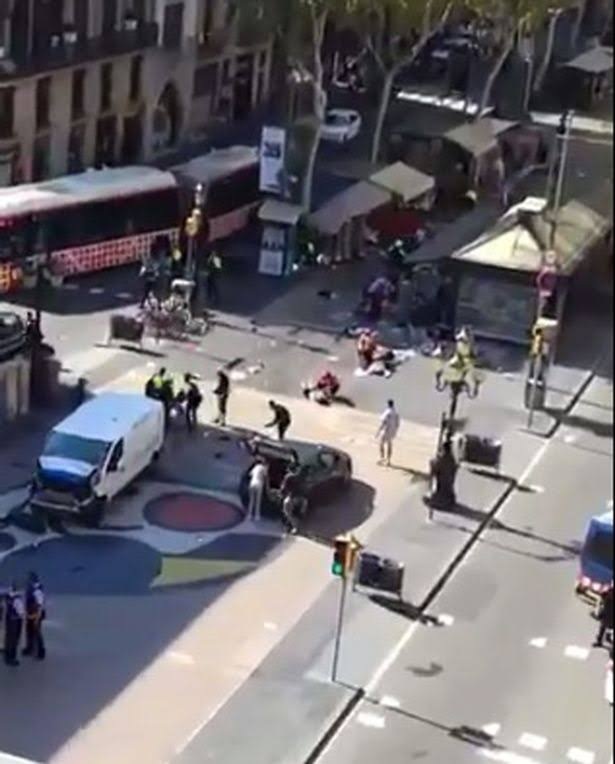 I had my first witness interaction with one of the worker at the very last newspaper kiosk that was run though by the white van before it came to horrific halt at just the spot we set up our cameras. It was almost 7:00am, and the man at the kiosk quietly mentioned that, “it was obligatorio (an obligation) for them to be back open, just as they would any other normal weekday morning”. And even though the daily newspapers would not arrive because the street was still closed, they wanted to show that “the best response was that things were back to normal.” (I would later view a photograph taken from an apartment overlooking the street, and the photo showed their kiosk utterly destroyed, with their metal display stands in pieces, and their postcards and magazines blown across the center of Las Ramblas. They must have been up all night putting their kiosk back together.

Later, we interviewed a visiting English couple who were caught up in the attack. They told stories of being protected for 6 hours in the local shops with other scared witnesses. They told us how the local restaurants and shops were supplying them with food and drinks, and broken English updates, while refusing payments or accepting of any gratitude for going above and beyond in their kindness to them. This was a theme we heard over-and-over as the day grew longer and the street opened to thousands upon thousands of locals walking the main sidewalks. Apart from Sant Jordi, this is the only time I have seen Las Ramblas this full of more locals than tourist.

This got me thinking – after spending two long days on Las Ramblas observing people, that “normal” had been the practice of ignoring Las Ramblas for many years. Quickly walking across it to get from the Barrio Raval to the Barrio Gothic. Telling visiting friends to ignore the chaos of the swarms of people and pick pockets. When the irony is that when I arrived to Barcelona, Las Ramblas was a symbol of all that I loved about living in this exciting, cosmopolitan, international melting pot of the city center.
Almost a day would not go by in my first two years that I would not spend some time there. Whether drinking a café con leche at Café de l’Ópera, or buying flowers from the kiosks that lined the middle, or picking up a local newspaper to practice Spanish, or just speaking with one of the locals that were always hanging out on the street corner of where I would meet guests to checked them into a tourist apartment (my first job here was with a local apartment website).
Back to normal for me is making an effort to go back to Las Ramblas more often to celebrate it like I use to.
Late last week, I met with a friend for coffee – as we do often during the week – to catch up about business and life. I suggested we go to Café de l’Ópera, and when we walked in, he remembered that this was the cafe twenty years ago that he would go with his girlfriend and romanticise about living the rest of their lives together. And twenty years and two kids later, they are still telling that story which they started over coffees on Las Ramblas all those years ago.
Las Ramblas represented that dream I had when I overstayed my visa, had no money, knew no one in Barcelona and spoke no other languages before I arrived – a dream many other Guiris like me share. Normal for me, is remembering to not forget what that meant back then to be excited by the normal.
Thank you Brian